Some of the most significant sites of the ancient world await you in Israel. Journey to Bethlehem, Nazareth, Caesarea, and the oldest city in the world, the ruins of Jericho. “Float” in the tranquil, healing waters of the Dead Sea or stop in the AHAVA Visitors Centre and learn about the world-famous cosmetics that come from the Dead Sea. Visit UNESCO World Heritage sites including Baha’i Shrine & Gardens, Acre, and Jerusalem’s magnificent Old City. Ascend the ancient walls of Masada, a UNESCO World Heritage site, by cable car. Enjoy a boat ride on the Sea of Galilee. Get a taste of the local flavour during lunch at a communal settlement, known as a kibbutz. Spend a relaxing four nights in the holy city of Jerusalem. Everywhere you look, the legendary stories of mankind’s collective history come alive in Israel.

Cultural Experiences
*Sedan Service to and from my selected airport († Not valid on group travel. Included in many U.S. cities within a 50 mile radius of more than 90 airport gateways. One transfer per room booking. Additional stops are not permitted on route. Other restrictions may apply; call for details.)

Day 1 – Overnight Flight
Join us as we explore Israel, an ancient land rich in tradition – and home to some of the world’s most important historic treasures.

Day 3 – Tel Aviv – Caesarea – Haifa – Acre – Tiberias
Follow the coast to the ruins of the ancient Roman capital of Caesarea, built by Herod the Great around 22 B.C. Marvel at its Roman theatre, aqueduct, and fortress. Travel the Valley of Armageddon to the excavation site of Tel Megiddo, which dates back to the Bronze Age. Next, take in the breathtaking panorama of Haifa and the Baha’i Shrine and Gardens on Mount Carmel (UNESCO World Heritage site). Step back in time in the ancient Crusader city of Acre (UNESCO). Your day comes to a close in Tiberias.
Meals: Breakfast & Dinner
Accommodation: Leonardo Plaza Hotel Tiberias (or similar)

Day 4 – Tiberias – Cana – Nazareth – Tabgha – Capernaum – Sea of Galilee
Set off for Cana, considered to be the site of the First Miracle – where Jesus turned water into wine. In Nazareth, visit the Church of the Annunciation and Mary’s Well. Continue to Mt. of Beatitudes, where Jesus delivered the Sermon on the Mount. See Tabgha, the site of the Miracle of the Loaves and Fishes. Before exploring the Galilee Boat Museum, make a stop at the ancient fishing village of Capernaum. Discover a boat that sailed the Sea of Galilee approximately 2,000 years ago – before heading out on a boat ride on those same waters. Get a taste of the local flavour during lunch at a communal settlement, known as a kibbutz.
Meals: Breakfast, Lunch & Dinner
Accommodation: Leonardo Plaza Hotel Tiberias (or similar)

Day 5 – Tiberias – Beit Shean – Jericho – Qumran – Dead Sea
Peek into Roman times at Beit Shean’s well-preserved ancient theatre. Continue along the Jordan River Valley to Jericho, considered to be the oldest city on earth. Journey to Qumran, the location of one of the most important archaeological finds of all time – the ancient Dead Sea Scrolls. Keep going to the lowest place on earth, the Dead Sea. Then it’s your choice! Stop at the AHAVA Visitors Centre and learn about the world-famous cosmetics that come from the Dead Sea -OR- experience the natural buoyancy of the Sea during a tranquil “float” in its healing waters, rich with salt and minerals. Enjoy the rest of your day at leisure.
Meals: Breakfast & Dinner
Accommodation: Isrotel Ganim Hotel (or similar)

Day 6 –  Dead Sea – Masada – Bethlehem – Jerusalem
Travel to the former palatial fortress of Masada (UNESCO). Ascend the ancient walls of Masada by cable car to Herod’s Palaces, the Roman Camp and the Synagogue. A stop in the city of Bethlehem, along the spread of the Judean Hills, delivers you to the Church of the Nativity – the birthplace of Jesus and the first church ever built. Tonight you arrive in one of the most captivating cities in the world, Jerusalem.
Meals: Breakfast & Dinner
Accommodation: Dan Boutique Jerusalem Hotel (or similar)

Day 7 – Jerusalem
Drive to Mount of Olives for an all-encompassing view of Jerusalem and the surrounding area. See the Church of Ascension and the Garden of Gethsemane. Discover the Kidron Valley and the tombs of Mary, Absalom, Zachariah, and James. Continue to St. Peter in Galicantu and Mt. Zion to discover the room of The Last Supper and the tomb of King David. Marvel at the Shrine of the Book at the Israel Museum, home to a selection of the Dead Sea Scrolls. Your day concludes at the Garden Tomb.
Meals: Breakfast
Accommodation: Dan Boutique Jerusalem Hotel (or similar)

Day 8 – Old City, Jerusalem
Come to know the Holy City of Jerusalem on a walking tour of the old walled city (UNESCO). See the Western (Wailing) Wall, the Temple area, the Dome of the Rock (outside view only), the Pool of Bethesda, and the Church of St. Anne. Next, walk the path of the Stations of the Cross as you traverse the Via Dolorosa, beginning at Pilate’s Judgment Hall and ending at the Church of the Holy Sepulchre. Later, continue exploring the city on your own or peruse the sights and sounds of the world-renowned Mahane Yehuda Market, known as the shuk, or open-air market.
Meals: Breakfast
Accommodation: Dan Boutique Jerusalem Hotel

Day 9 – Jerusalem
Enjoy the day at leisure; explore on your own or simply relax. Perhaps you’ll choose to take an optional tour to the Genesis Land on a jeep ride through the Judean Desert. This evening, join your fellow travellers for dinner at one of Jerusalem’s most popular restaurants.
Meals: Breakfast & Dinner
Accommodation: Dan Boutique Jerusalem Hotel 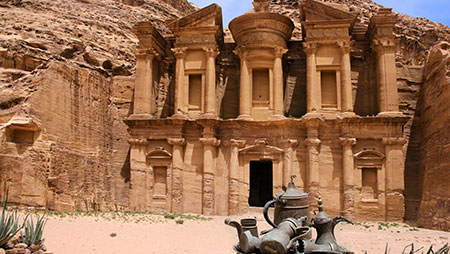 4-Night Jordan Extension from $1410 per person

Explore more of this amazing region. Extend your adventure with a 4-night Jordan Extension. Tour the incredible stone-carved city of Petra. Experience the desert life of the Bedouin people in Wadi Rum. Visit historic sites such as Madaba, Mt. Nebo and Jerash, the “Pompeii of the East.” (2 nights in Petra; 1 night Amman; 1 night Tel Aviv)

Regular Canadian passport
Your passport must be valid for at least 6 months beyond the date you expect to leave Israel, the West Bank or the Gaza Strip.

Entry card
The Government of Israel issues an entry card on arrival.

To truly experience the program and destination, you need to be able to participate in physical activities such as longer walking tours, walking over uneven terrain, climbing stairs and periods of standing. Some of the touring days may be longer, with select included activities occurring later in the evening.

Secrets of the Douro River Cruise