Learn about Central Europe’s rich history and see its historical sites as you travel through the heart of Germany, Poland, Slovakia, Hungary, Austria and the Czech Republic.

Roundtrip airfare to Frankfurt not included but can be added

Upgrade your tour package to First Class Vacation (Globus): The Best of Eastern Europe. For more information request a quote above 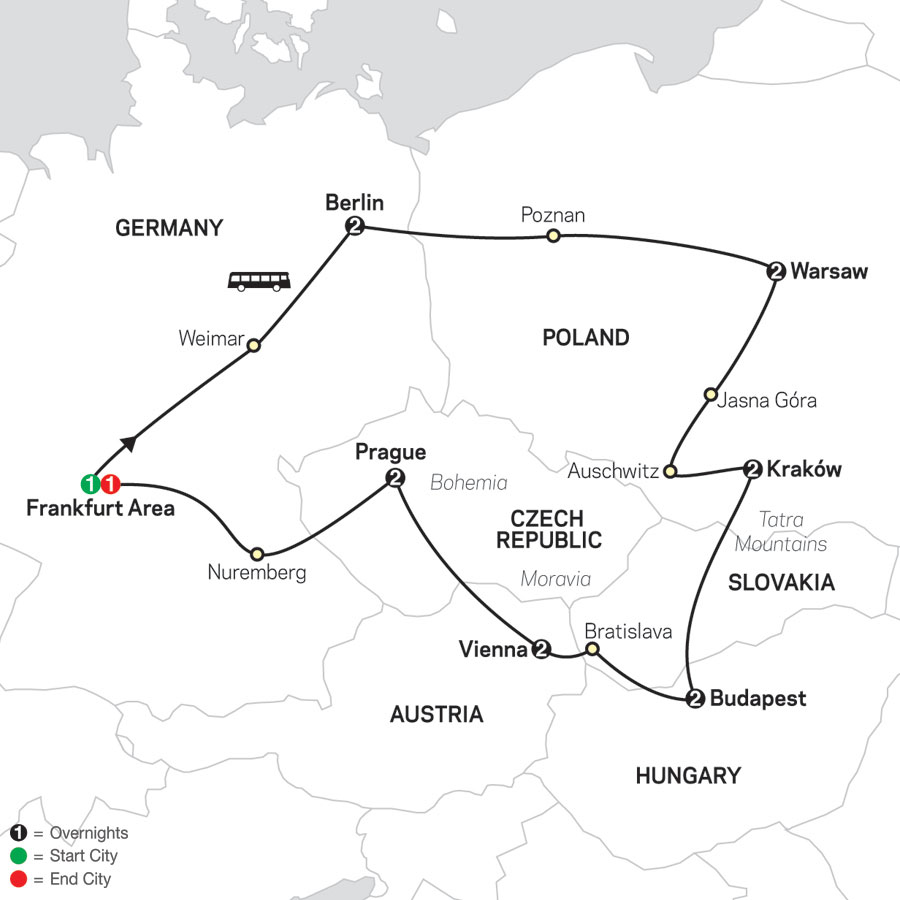 Inside visits and special features are shown in UPPERCASE in the tour description, including admission charges where applicable.

Check into your hotel. The rest of the day is free. Tonight, meet your Tour Director and fellow travelers.
Accommodation: Leonardo Royal Frankfurt (or similar)

Our first stop today is in Weimar, one-time intellectual heart of Germany and host to such luminaries as Luther, Cranach, Bach, Liszt, Schiller, and, of course, Goethe himself. It was at one time rightly known as the “Athens of Germany.” Continue through Thuringia and Saxony-Anhalt all the way to Germany’s capital city, Berlin.
Today’s Distance: 357 mi/ 575 km
Accommodation: Abba Berlin or NH Alexanderplatz (or similar)

On this morning’s included guided tour, learn how the city is no longer divided but every bit as fascinating. Once the city of contrasts with its West and East side separated into two different worlds by a wall, Berlin has developed into a harmonious blend of old and new. It has preserved the old buildings, such as the State Opera House and Brandenburg Gate; its neoclassic-style boulevards, such as the Kurfürstendamm and Unter den Linden; and it has created brand new buildings in the most daring, contemporary architectural styles. It is once again Germany’s capital and one of Europe’s most lively and interesting cities.

Drive east to Poznan, one of Poland’s oldest trading centers, and admire its renaissance market square. Continue to Warsaw, capital of Poland.
Accommodation: MDM or Metropol Hotel (or similar)

The included sightseeing tour is an excellent introduction to Warsaw, magnificently reconstructed after wartime destruction. Today, its wide avenues contrast strikingly with the narrow lanes of the old section.

Two encounters with history on your southbound journey today. First, JASNA GÓRA near Czestochowa, the monastery that withstood the repeated onslaught of overwhelming Swedish forces during the religious wars of the 17th century. Since then, its Black Madonna has become the country’s national symbol. In the afternoon, visit what is left of the AUSCHWITZ CONCENTRATION CAMP, a chilling reminder of the Holocaust. Evening arrival in Kraków.
Accommodation: Swing (or similar)

This, they say, is Poland’s most beautiful city. For almost 500 years it was the country’s capital, and today, it is without a doubt its cultural capital. Join the included morning sightseeing in ancient Kraków, for centuries the residence of Polish kings. See the Market Square, the Jewish Quarter, St. Mary’s Church, and visit WAWEL CATHEDRAL. Free time later to explore this interesting town at your own pace and mingle with the locals.

Travel through three countries today. First, south to the Tatra Mountains of Poland, then through scenic Slovakia, and finally into Hungary. Your destination is Budapest, the liveliest Eastern European capital.
Accommodation: Novotel Centrum (or similar)

Budapest is a treasure trove of architectural wonders, from Gothic to Baroque; Neoclassical to Art Nouveau, but also full of history, a food capital, and surprisingly rich in thermal waters. Discover all of this and more during the guided city tour.

Journey northwest and cross the border into neighboring Slovakia. Stop in Bratislava, its intriguing capital on the banks of the Danube to explore the medieval Old Town. Continue west and enter Austria, arriving in magical Vienna.
Accommodation: Star Inn Schoenbrunn (or similar)

Join the included city sightseeing tour for a great introduction to the major sights: the State Opera, Parliament, the ornate Rathaus (Town Hall), and views of the Hofburg Imperial Palace from Heroes’ Square. You’ll have plenty of time to discover Vienna on your own or join our wonderful optional excursions.

Morning at leisure or join an optional excursion. This afternoon, cross the Czech border into Moravia, then through the rich farmlands of Bohemia to Prague.
Accommodation: Clarion Congress Hotel or Hotel Duo Praha (or similar)

The wealth of gothic and baroque architecture perhaps inspired Dvorak and Smetana, both Prague composers. The included guided sightseeing features landmarks such as the Jewish Quarter, Charles Bridge, and the Old Town Square with the ASTRONOMICAL CLOCK. Your Tour Director may suggest an optional evening excursion with traditional Czech music and entertainment.

This morning visit Nuremberg with its pretty market square and Our Lady’s Church before heading towards the Frankfurt Area.
Accommodation: Mercure at Friedrichsdorf (or similar)

Your vacation ends with breakfast this morning.

November 1, 2021-January 3, 2022
3 nights Papeete, 14 nights Moorea in 2 bedroom villa rentals and transfers
Rates are per person based on quad occupancy