An unforgettable cruise down the iconic Danube & through the heart of old Europe. Walking tours, invitations into the homes of locals & sightseeing excursions showcase the magnificence of yesteryear.

Book with Confidence: Change or cancel 60 days prior to travel. The value of the booking will be applied as a Future Travel Credit (FTC) which is valid for 24 months. 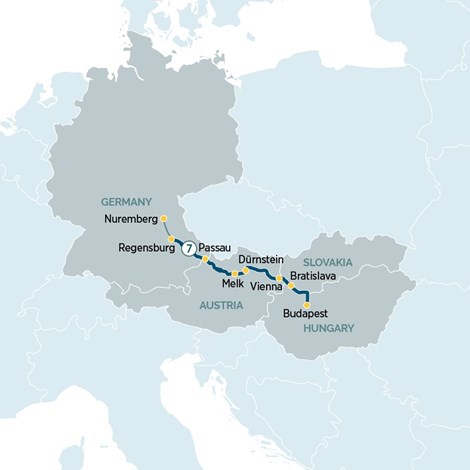 Day 1 Sun, 30 Oct Budapest (D)
Welcome to Budapest. You will be met at the airport and transferred to your contemporary Emerald Cruises Star-Ship, before enjoying time at leisure to explore Budapest.

This evening, enjoy an authentic Hungarian folklore show on board, followed by a traditional dinner.

Day 2 Mon, 31 Oct Budapest (B,L,D)
The ancient Roman city of Aquincum once sat on the site of modern Budapest, where architecture from across the centuries shines a light on the history of the Hungarian capital. Originally two separate cities, Buda on the right and Pest on the left offer incredibly different views on the culture of one of the liveliest cities in Eastern Europe.

Today, you will have the opportunity to explore the city during a guided tour, including Heroes’ Square and the UNESCO World Heritage-listed Andrássy Avenue and Buda Castle District. Alternatively, enjoy a hike to Buda Hill for a postcard-worthy panorama of the Danube banks.

EmeraldACTIVE
A hike to Buda Hill

Day 3 Tue, 01 Nov Bratislava (B,L,D)
This morning, relax on board as we sail to Bratislava. An ancient landscape awaits, where remarkable towers add to a skyline that perfectly encapsulates the history of the city, and preserved medieval fortifications tell tales of a turbulent past. Your local guide will take you through the heart of the city, as you soak in sights of the lavish Episcopal Summer Palace and the neo-Renaissance façade of the Slovak National Theatre.

If you are feeling more active, then you could instead choose to hike around the serene gardens of Bratislava Castle, offering the perfect environment for the Shakespeare festival that occurs during the summer months.

This afternoon, you will be invited into the home of a local family to learn about their culture over coffee and cake.

EmeraldPLUS
Home-hosted coffee and cake with a local family

EmeraldACTIVE
A hike to Bratislava Castle

Day 4 Wed, 02 Nov Vienna (B,L,D)
Set on the banks of the Danube, Vienna has been considered to be Europe’s capital of music for centuries. Viennese Classicism is still highly regarded around the world, as the 18th century brought with it the First Viennese School, consisting of Haydn, Mozart and Beethoven.

Today, your local guide will take you for a drive around the world-famous Ringstrasse and a walking tour of the UNESCO World Heritage-listed Historic Centre of Vienna, including a peppering of lavish Baroque mansions and the Vienna State Opera. If you are feeling more active, then choose to explore on two wheels instead, cycling along the riverbanks before touching on Danube Island and Prater, home to a traditional 19th-century Ferris wheel.

Day 5 Thu, 03 Nov Dürnstein – Melk (B,L,D)
This morning, arrive in Dürnstein; a small town nestled in the heart of the Wachau wine region. When you arrive, you will have the chance to hike to the medieval ruins of Dürnstein Castle, the site where King Richard I was held prisoner following his return from the Third Crusade, and part of the UNESCO World Heritage-listed Wachau Cultural Landscape, a place peppered with natural lookout points that highlight the beauty of the region. Alternatively, enjoy a guided bike ride from Dürnstein to Melk, traversing the banks of the Danube.

Later, sail through the Wachau Valley, a place that showcases a plethora of historic architecture, in the form of monasteries, castles and ruins, and the development of urban design through the ages. When you arrive in Melk, you will be taken for a tour of the 900-year-old Melk Abbey, touching on the lavish surrounds of the former palace and viewing ancient manuscripts in the monastic library.

EmeraldACTIVE
A guided bike tour along the Danube

Day 6 Fri, 04 Nov Passau (B,L,D)
After a morning of sailing along the Danube, perhaps relaxing with a drink in hand on the Sun Deck, we will take you into the heart of Passau. As the point at which the Danube, Inn and Ilz rivers meet, Passau is also known as the Dreiflüssestadt, meaning the “City of Three Rivers”.

Your included guided tour of Passau will unveil its noteworthy Gothic and Baroque architecture. The town was destroyed by a series of fires in the 17th century, leaving a blank canvas for Italian architects to work with.

After your tour, enjoy some free time to explore Passau at leisure, before an afternoon spent sailing towards Regensburg.

EmeraldACTIVE
A hike to Veste Oberhaus

Day 7 Sat, 05 Nov Regensburg (B,L,D)
This morning, we will arrive in Regensburg, a city that has been generously steeped in history, built on the site of an ancient Roman fort that went on to become a major centre for trade during the Middle Ages. Your guided walking tour of Regensburg will showcase its UNESCO World Heritage-listed medieval centre, where ancient Roman architecture can be found sitting alongside 11th – 13th century patrician houses. Narrow cobbled lanes and tall façades help to define the character of this enchanting Bavarian city.

This evening, enjoy a traditional Bavarian band on board.

EmeraldPLUS
A traditional Bavarian band on board

Day 8 Sun, 06 Nov Regensburg – Nuremberg (B)
After breakfast, it’s time to say farewell to your fellow guests and disembark the ship for your transfer to the airport, taking memories of Roman architecture and the cultural divide in Budapest with you.

Day 1 Sun, 06 Nov Prague
When you arrive in Prague, you will be met at the airport and transferred to your centrally located hotel for a three-night stay.

Day 2 Mon, 07 Nov Prague (B)
This morning, join a walking tour of Prague to explore its vivid history through its Gothic, Renaissance and Baroque architecture, with each style encapsulating a slice of the city’s past. Witness the splendour of Mozart’s Theatre, the Little Square and the Astronomical Clock, a medieval wonder that can be dated back to the start of the 15th century.

Day 3 Tue, 08 Nov Prague (B)
Today is yours to spend exploring Prague at leisure, perhaps uncovering the secrets of Josefov, the Jewish Quarter and Malá Strana, one of the most historic regions in the city. Your tour director will be available to help you plan your day and to answer any questions that you may have.

Day 4 Wed, 09 Nov Prague (B)
After breakfast, it is time to bid farewell to your fellow guests and leave Prague’s idyllic centre for your transfer to the airport, taking memories of ancient wonders and idyllic panoramic views of UNESCO World Heritage-listed areas with you.

Optional Tour in Prague: Tastes of Czechia $60 per person

From the moment you book your holiday with Emerald Cruises, we want you to feel the benefit of our award-winning service and exceptional EmeraldVALUE. That’s why we’ve created our Book with Confidence Assurance to give you complete peace of mind when booking your next getaway with us.

Terms and conditions: Flexible Booking Policy: To ensure guests can book with confidence, for all new 2022/2023 bookings Emerald Cruises is including a Flexible Booking Policy which allows guests to defer travel and transfer to an alternate departure or itinerary or cancel up to 60 days prior to travel, with no Emerald Cruises fees (3rd party fees may apply). For cancellations, the value of the booking will be applied as a Future Travel Credit (FTC) which is valid for 24 months. This flexible booking and cancellation policy excludes Russia. Please note, final payment due date will remain as per booking conditions; however, this flexible policy allows changes to be made up to 60 days prior to travel.